Ivana Trump Dead: What Was Her Cause of Death?

Ivana Trump is dead at the age of 73, according to former President Donald Trump.

What was her cause of death? How did Ivana Trump die? Police responded to a call that a person had gone into cardiac arrest, according to ABC7, and she died of natural causes.

“The FDNY said she suffered cardiac arrest and was dead by the time paramedics had arrived,” The New York Post initially reported.

However, it was later reported that Ivana was found unconscious and unresponsive at the bottom of a staircase, according to ABC7, which reported that police are now investigating whether she fell, and whether that contributed to her death. The medical examiner will determine the official cause of death.

TMZ subsequently reported that the medical examiner determined it was the fall that caused her death and she suffered blunt impact injuries to the torso as a result of it. The medical examiner believes the death was accidental, according to Fox News.

She was the former president’s first wife, and the mother of his three oldest children.

Here’s what you need to know:

1. Trump Wrote That Ivana Died at Her Home in New York City, Calling Her a ‘Wonderful’ & Beautiful’ Woman 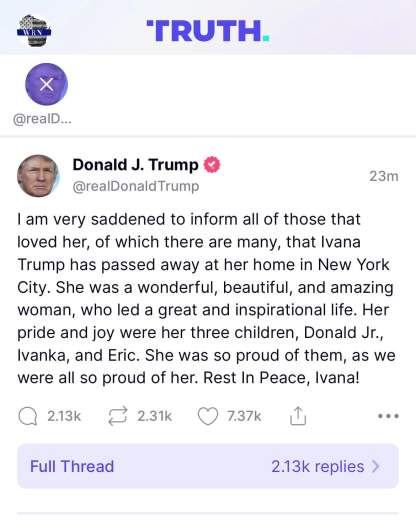 I am very saddened to inform all of those that loved her, of which there are many, that Ivana Trump has passed away at her home in New York City. She was a wonderful, beautiful, and amazing woman, who led a great and inspirational life. Her pride and joy were her three children, Donald Jr., Ivanka, and Eric. She was so proud of them, as we were all so proud of her. Rest in Peace, Ivana!

Ivanka Trump wrote a tribute to her mother on Instagram:

Heartbroken by the passing of my mother. Mom was brilliant, charming, passionate and wickedly funny. She modeled strength, tenacity and determination in her every action. She lived life to the fullest — never forgoing an opportunity to laugh and dance.

I will miss her forever and will keep her memory alive in our hearts always. ️

Ivana helped Trump build his real estate empire before their marriage dissolved in tabloid headline-making scandal after his infidelity. He went on to marry and divorce Marla Maples and then married Melania Trump, having a child with each woman.

Ivana was planning a trip to St. Tropez the day after her death, according to Page Six.

2. Ivana’s Death Is Not Considered Suspicious 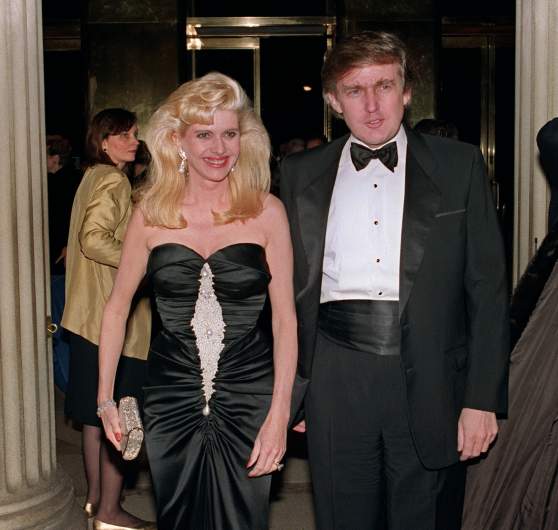 According to ABC 7, Ivana Trump’s death is not considered suspicious. Police responded to the call from Ivana’s residence in Manhattan at 10 East 64th Street on the Upper East Side at 12:40 p.m. on July 14, 2022.

Daily Mail reported that Ivana was due to have a hair appointment the day she died.

The Trump family also released a statement confirming Ivana’s death. According to ABC 7, it read,

It is with deep sadness that we announce the passing of our beloved mother, Ivana Trump. Our mother was an incredible woman — a force in business, a world-class athlete, a radiant beauty, and caring mother and friend. Ivana Trump was a survivor. She fled from communism and embraced this country. She taught her children about grit and toughness, compassion and determination. She will be dearly missed by her mother, her three children and ten grandchildren.

The New York Post reported that Ivana’s daughter, Ivanka, is in “shock” at news of her mother’s death, and Ivana spent her last days with family.

3. Ivana Trump, Who Was Born in the Former Czechoslovakia, Married Donald Trump in 1977 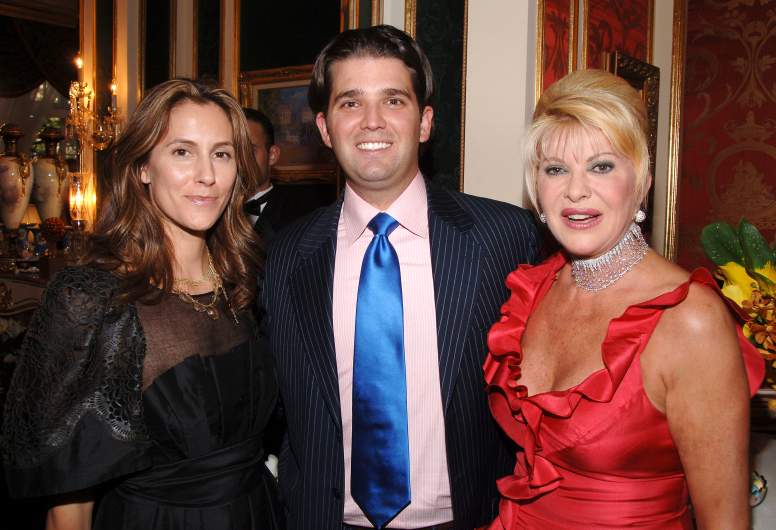 According to Fox News, Ivana Trump was born in 1949 in what was then Czechoslovakia. She married Donald Trump in 1977, and theirs was a long-term marriage. They divorced in 1992.

She was born Ivana Marie Zelníčková, according to The New York Post. According to The Post, Ivana Trump was a model in the early 1970s before she met Donald Trump in 1976 in New York City.

She infamously confronted Marla Maples on a ski slope in Aspen, Colorado, about her affair with Donald Trump. According to Page Six, the wounds were still deep enough that Ivana left the presidential inauguration early to avoid running into Marla.

According to Town and Country Magazine, Marla and Donald met at an “Upper East Side watering hole, and Donald offered to help her party get a table.” 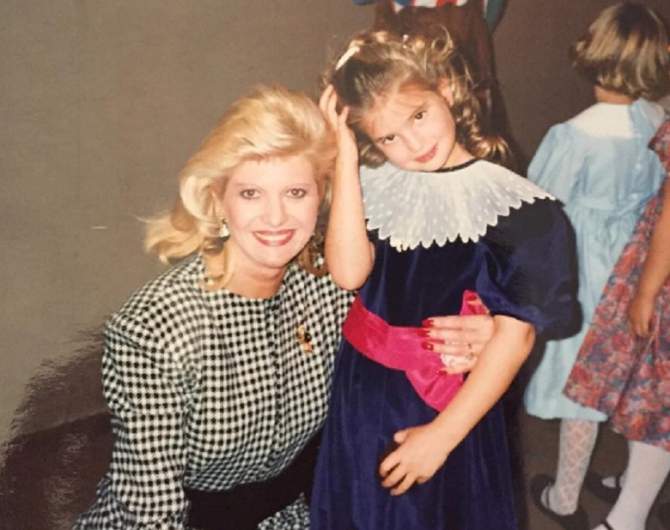 Ivana was an active player in helping run Trump’s real estate empire. According to Town and Country, during their marriage, she ran the Plaza Hotel, was president of the Trump casino in Atlantic City, and was vice president of Interior Design for the Trump Organization.

She told the New York Post in 2016 that she still gave Donald Trump advice, saying, “We speak before and after the appearances and he asks me what I thought.” She told the Post she told him to “be more calm” and gave him the phrase, “You think it, I say it.”

She added, “But Donald cannot be calm. He’s very outspoken. He just says it as it is.” She told the Post she thought he would make a great president, saying, “He’s no politician. He’s a businessman. He knows how to talk. He can give an hour speech without notes . . . He’s blunt.”

5. Ivana, a Competitive Skiier, Had Three Other Husbands 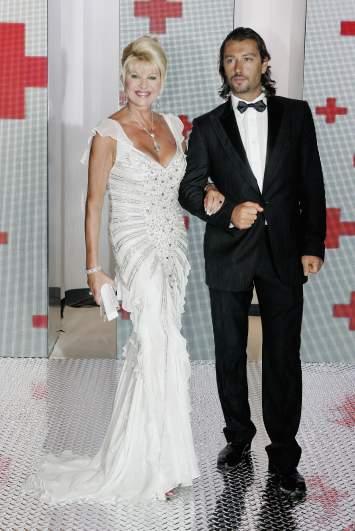 According to the Post, Ivana was a competitive skiier who claimed she was an alternate for the 1972 Olympic ski team for Czechoslovakia, although this claim is disputed.

The newspaper reports that her first husband was an Austrian skiier named Alfred Wiklmayr, to whom she was married from 1971 to 1973. They lived in Montreal.

Ivana’s third husband was Riccardo Mazzucchelli. They were married from 1995 to 1997. He was also Italian and preceded her in death, according to Radar Online.

Her fourth husband was an Italian actor named Rossano Rubicondi. According to the Post, they married in 2008. He preceded her in death at age 49, dying of melanoma. Their marriage ended in 2009, but they dated on and off after that, the site reported.